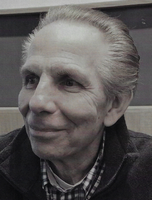 Niskayuna, NY – George S. Schrom, 72, passed away Tuesday September 29, 2020 after a courageous battle with cancer. George was born and educated in Schenectady and was a lifelong resident. He was the son of the late George J. and Elnora (Nocian) Schrom. He proudly served in the US Army during the Vietnam War. George retired after many years of working at the General Electric Company. A devoted and loving husband to Madge for 35 years, the couple always appreciated each other's company and enjoyed activities together like antiquing and going to car shows. George was happiest when working in his yard and doing projects at home. In addition to his parents, he was predeceased by his brothers Mark and Wayne Schrom and mother-in-law Jane Nicolella. George is survived by his cherished wife, Madge Schrom; father-in-law Joseph Nicolella; sisters-in-law Diane Guendel and Kristine Croce; and nieces and nephew Collette Croce, Erin Croce, Louis Croce, and Hanna Jane Guendel. Funeral services will be private at the convenience of the family. In lieu of flowers, memorial contributions may be made in George's name to IPH (Interfaith Partnership for the Homeless), 176 Sheridan Ave., Albany, NY 12210 or at www.iphny.org.