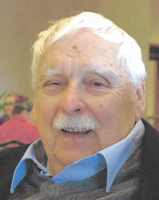 Raymond J. Sarnacki, 100, of Schenectady, peacefully passed away on March 21. 2022 at Kingsway Arms Nursing Center. A graduate of Mont Pleasant High School (class of 1941), Ray enlisted in the Navy during World War II, serving as a Radarman 2C on a Destroyer Escort, the U.S.S. Enright. He was a "plank owner" and served on the ship from its commissioning in Philadelphia, until the Navy decommissioned the ship in 1946. He saw duty in both the North Atlantic and Pacific Theaters. Following the war, he returned to his job at GE, where he remained for 42 years. In 1949, he married Betty Jane Brodzinski and lived happily with her for their 44 years together, raising a family. He was a long-time summer resident of Lake George. Ray was predeceased by his mother, Alexandra (Nietubicz) and father, Vincent; wife, Betty Jane; and five siblings: Joseph, Charles and Henry Sarnacki, Irene Marcinkowski and Clara Sobieski; granddaughter, Megan Belter. Survivors include his son, Raymond (Kathy) Sarnacki; daughter, Hilary (Mike) Belter; grandchildren Michael Sarnacki (Beth Ann), Karen Sarnacki, Lauren Larison (Adam), Stephen Belter and Carrie Belter. He had four great-grandchildren: Logan and Charles Larison, Tyler and Elliott Sarnacki. Ray is also survived by his dear friend, Annie Wright. The family wishes to express their gratitude to the staff of Kingsway Arms Nursing Center, where Ray was in residence, for the kind and compassionate care. Family and close friends are invited to attend the service at Daly Funeral Home, 242 McClellan St., Schenectady, on Thursday, March 31, at 11:00 a.m. An hour visitation will precede the service, from 10:00 to 11:00 a.m. Interment will take place in St. Adalbert Cemetery in Rotterdam, NY. In lieu of flowers, memorial contributions may be made to the U.S.S. Slater Destroyer Escort Historical Museum, P.O. Box 1926, Albany, NY 12201-1926, in memory of Raymond J. Sarnacki - U.S.S. Enright DE 216.