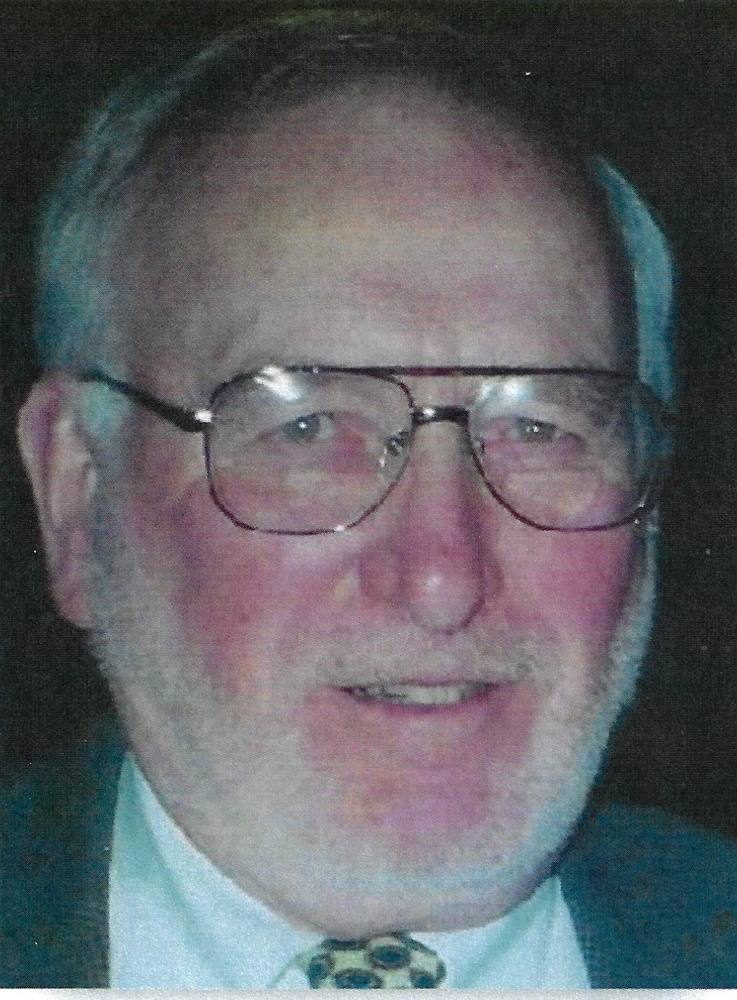 Please share a memory of Edward to include in a keepsake book for family and friends.
View Tribute Book
Edward J. Canty (Ed Canty) of Schenectady, beloved husband of Kathryn (Kay) Frey Canty, passed away peacefully at his home on March 12, 2021. Born in Buffalo, NY on September 4, 1932, he was the son of the late John William Canty and Marie Fogle Canty. Ed was educated in Buffalo and was a graduate of St.Vincent de Paul Elementary School and Burgard Vocational High School. He received a BS in Accounting from the University of Buffalo in 1958. Ed was known for his welcoming smile, quick-wit and gentle nature. He never forgot where he came from and throughout his life he was passionate about "everything Buffalo." Family was an essential part of Ed's life and he loved nothing more than a large gathering of family and friends. Above all, Ed was happiest in the presence of children. Ed served in the US Army Signal Corps as a high-speed radio operator from 1952 to 1954. Prior to his military service, Ed worked for his father's ceramic tile business in Buffalo. While attending the University of Buffalo under the GI Bill, Ed worked for General Electric, Bethlehem Steel, and the Chevrolet Division of General Motors. After receiving his accounting degree, Ed began working for the NYS Public Service Commission in Buffalo in 1962 and transferred to the Albany office in 1968. In 1971, he transferred to the Department of Transportation where he eventually became the Assistant Commissioner for Regulatory Affairs. Ed retired from the New York State DOT in March 1991, after 29 years of service. In his retirement years, Ed worked with his sister-in-law, Gerry Frey Recktenwald, constructing crossword puzzles for weekly and college newspapers under the name of GFR Associates. He also established the Michael Canty Memorial Fund, in memory of his son who perished at the World Trade Center on September 11, 2001. This fund provides an annual educational scholarship at Schenectady High School. Since 2001, the Michael Canty Scholarship has been awarded to 19 graduating seniors to assist them in their college education. The Memorial Fund also sponsors students each year through the Capital Region Sponsor-A-Scholar program. In 2008, Kay and Ed Canty were presented with the Crystal Apple Award as Distinguished Supporters by The Schenectady City School District Educational Foundation. In 2011, Kay and Ed were awarded the title of Patroons of the City of Schenectady for their years of service to the community. Ed was a parishioner of St. John the Baptist Church from 1970 to 1995 and served as a trustee in the mid 1990's. Most recently, he was a parishioner of St. Kateri Tekakwitha through which he volunteered at the Salvation Army Soup Kitchen, among other charitable organizations. Ed leaves behind his beloved wife, Kathryn Ann Frey Canty (Kay), whom he married on August 13, 1960 at St. Mary's Church in Corning, NY. In addition, he leaves behind seven children: Mary and her husband Robert Linden of Becket, MA and their children Tom and Anne; Jack and his wife Maureen of Skaneateles, NY and their children Margaret, Jack and Maeve; Bill and his wife Lori of Ballston Spa, NY and their children Jocelyn, Ed and Joe; Tom and his wife Anne of Frankfurt, Germany and their children Nicholas and Christopher; Tim and his wife Karen of Schenectady, NY and their children Kevin, Grace, Audrey and Caroline; Catherine (Caker) and her husband Bill Deasy of Mansfield, MA and their children Michael, Kevin and Kate; and Peter and his wife Beth of Brooklyn, NY and their children Howard, Sean and Rita. He also leaves behind his daughter-in-law Kristin Canty (Jim) of Boston, MA and their children Brendan, Caitlin, Charlie and Maggie. Ed was predeceased by two sons, Jim and Michael. He was also predeceased by his five siblings: William, Howard, John, and Janet Canty, and Margaret Gessert. Funeral services will include a wake on Wednesday, March 17th, from 6:00 p.m. to 8:00 p.m. at Daly Funeral Home (242 McClellan St.) and a Mass of Christian Burial at St. Kateri Tekakwitha (1803 Union St.) on Thursday, March 18th at 10:00 a.m. Burial will follow at St. Joseph's Cemetery. For those who cannot attend, the Funeral Mass will be live-streamed at: https://us02web.zoom.us/j/83330317732?pwd=NCtoQVg0V1ZlUXNib3VHdVdxSW9PZz09 Meeting ID: 833 3031 7732 Passcode: 863311. In lieu of flowers, contributions may be made to the Michael R. Canty Memorial Fund (16 Hummingbird Ct. Schenectady, NY, 12309) or The Community Hospice Foundation (310 South Manning Blvd. Albany, NY 12208).
To plant a beautiful memorial tree in memory of Edward Canty, please visit our Tree Store

Look inside to read what others have shared
Family and friends are coming together online to create a special keepsake. Every memory left on the online obituary will be automatically included in this book.
View Tribute Book
Services for Edward Canty
There are no events scheduled. You can still show your support by planting a tree in memory of Edward Canty.
Plant a tree in memory of Edward

Share Your Memory of
Edward
Upload Your Memory View All Memories
Be the first to upload a memory!
Share A Memory
Plant a Tree