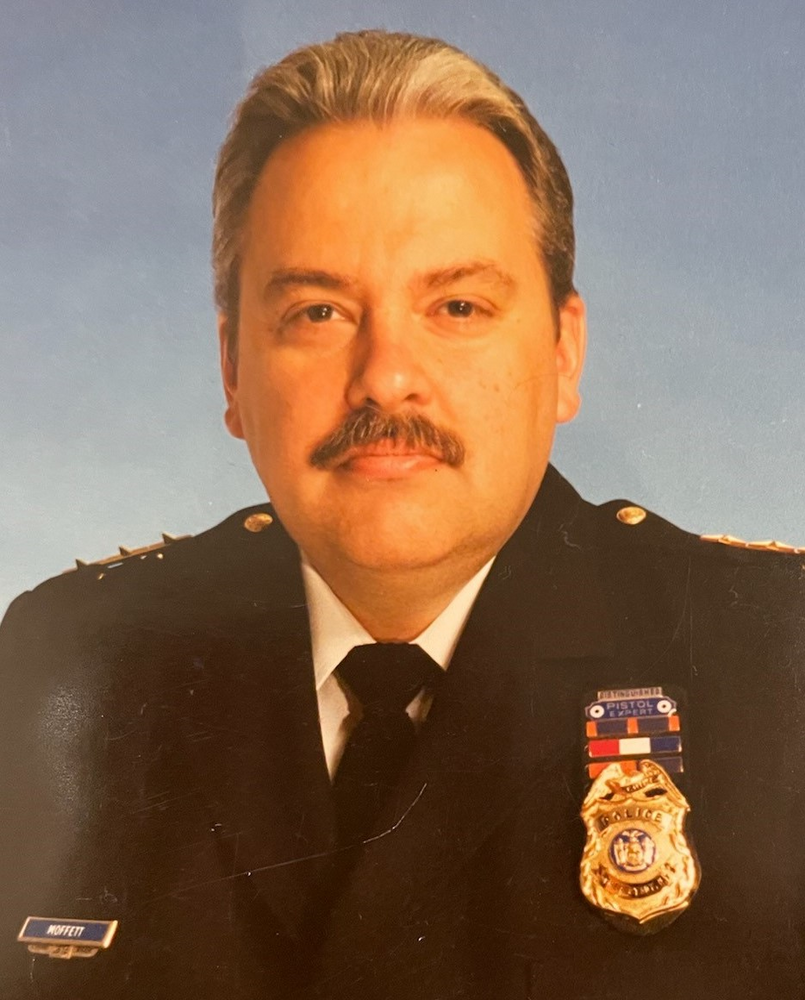 Please share a memory of Michael to include in a keepsake book for family and friends.
View Tribute Book
Michael George Moffett, 69, passed away peacefully at home surrounded by his loving family on Wednesday December 22, 2021, after a long illness. Michael was born at St. Clare's Hospital on May 12, 1952. He was a lifelong resident of Schenectady and a graduate of Linton High School. Michael earned his B. A. in Political Science at the University at Albany and his Juris Doctorate from Western New England School of Law. Michael served as a member of the Schenectady Police Department from 1975-1996, starting as a patrol officer and working his way up to Chief of Police. After his retirement from the Schenectady Police Department, Michael served as Commissioner of Public Safety in Utica, NY. He was currently employed as a Senior Narcotic Investigator with the Bureau of Narcotic Enforcement with the NYS Department of Health. Michael was a veteran of the armed forces and served from 1972-1974. He enlisted in the Army and completed military police training in Fort Gordon, GA and was assigned to the military prison at Fort Leavenworth, KS. Michael cherished his time with family. As a boy, he enjoyed the outdoors with hiking trips to Mt. Marcy and hunting at "The Lodge" with his dad, cousin Dan and Uncle Don. He looked forward to spending time with family on Sacandaga Lake with boating, swimming, cookouts and camp fires. Michael loved his memorable driving trips out west to the National Parks with his wife Mary. He looked forward to monthly dinners together with "the guys" where they would catch up and insult each other. He was "G-PA" to his granddaughter Molly, who was the apple of his eye. Michael was predeceased by his parents George and Mary Lou Moffett and his brother Christopher Moffett. He is survived by his loving wife Mary (McCarthy) of 48 years and his daughters Joy (Ryan) Maloney and Allison (Brian) Miranda, his grandchildren Molly Maloney and Matthew Miranda, sisters : Carol (Joseph) Daley, Kelly (Michael) Riley and Ann Kaskel, his sisters-in-law Rose (Stan) Marchinkowski and Julia Leiden and several nieces and nephews. Calling hours will be Monday, December 27, 2021from 4:00 to 7:00 p.m. at Daly Funeral Home, 242 McClellan St., Schenectady. A Mass of Christian Burial will be celebrated Tuesday, December 28, 2021, 9:00 a.m. at St. Luke's Catholic Church, Schenectady. Interment will be in Most Holy Redeemer Cemetery, Niskayuna. The family would like to thank Dr. Asim Yousif and Dr. Arthur Vakiener for the excellent care provided to Michael. Donations in his memory can be made to the City Mission of Schenectady or Tunnel to Towers Foundation.
To plant a beautiful memorial tree in memory of Michael Moffett, please visit our Tree Store

Look inside to read what others have shared
Family and friends are coming together online to create a special keepsake. Every memory left on the online obituary will be automatically included in this book.
View Tribute Book
Services for Michael Moffett
There are no events scheduled. You can still show your support by planting a tree in memory of Michael Moffett.
Plant a tree in memory of Michael

Share Your Memory of
Michael
Upload Your Memory View All Memories
Be the first to upload a memory!
Share A Memory
Plant a Tree